When I went to Israel with Ray Vander Laan (RVL), we visited the Herodium and learned about the one called “Herod the Great.” We identify him as the Herod who killed the baby boys of Bethlehem. RVL taught this incredible message identifying the contrast between this Herod and the baby who he was so concerned with killing, and it went something like this:

There once was this guy named Herod the Great. He was an Edomite from Idumea, a desert place in the southern part of Israel/Palestine. He was an Arab, but practiced Judaism. His father curried favor with Pompey, the Roman Caesar who took over Israel, and Pompey made his father king over Israel. Upon his father’s death, Israel was split into two parts, one for each of his sons to rule. Herod’s brother was king of Jerusalem, and he was king of Galilee.

The last of the Jewish rulers, the Hasmonean dynasty, revolted and killed Herod’s brother, and came for Herod the Great. Herod ran to Rome, where he was officially made “King of the Jews” by Caesar Octavian in 37bc until his death in 4bc. There, they gave him an army, with which he came back and slaughtered thousands upon thousands of Jews.

Herod was exceptionally wealthy by birth. Historians say that if you inflated his wealth into today’s standards, he was the wealthiest man in history. Ever. His family owned every balsam tree on the planet. Back then, balsam was considered an extreme aphrodisiac. Women would put a vial in the heel of their shoe, and stomp on it as they were near the man they wanted, and the scent was supposed to entrance the man into wanting the woman – this is actually talked about in Isaiah:

The Lord said:
Because the daughters of Zion are haughty
and walk with outstretched necks,
glancing wantonly with their eyes,
mincing along as they go,
tinkling with their feet,

A one-ounce vial would cost about 10k in today’s world. And Herod owned every single bit of it. He literally owned the world. He owned four palaces, each one over 44 acres. Caesar’s biggest palace was 3 acres. He paid all the taxes from Judea out of his own pocket because it was so poor, they couldn’t pay what was owed. Rather than fall out of favor with Rome, he just paid the entire country’s taxes out of his own pocket.

He prided himself on being an athlete of the highest caliber. He actually won an Olympic crown (gold medal).

He was absolutely brilliant builder, trained in architecture. He built entire cities, the most impressive being Caesarea Maritima: 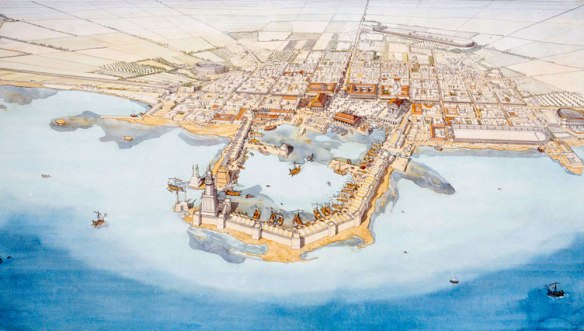 He expanded and “Beautified” the second temple: 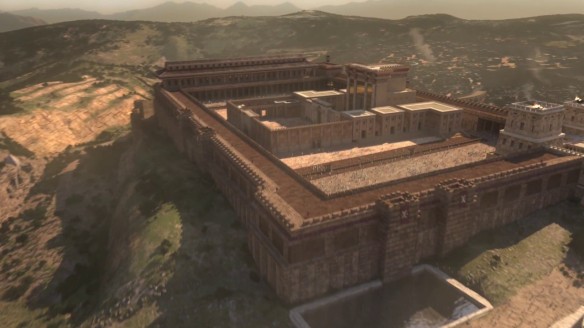 He built multiple palaces and an army fortress in the desert on Masada:

He built 14 cisterns into this rock, had at least 2, if not 3 swimming pools, army barracks, his palaces were built with some of the highest qualities mosaic tiles and paint ever found from ancient history.

Herod legitimized his kingship of Israel by marrying into the Hasmonian dynasty (the Jewish royalty), to a woman named Miraim. He became truly obsessed with her, madly, passionately in love with her. The only thing about him that shined brighter than his genius, however, was his crazy. Herod’s sister was totally against the marriage, and so she started a rumor that Miraim was unfaithful, hoping to dissolve the marriage. What she didn’t expect was what Herod did; he interrogated 7000 Jews under torture by pulling to death, got the confirmation he so feared, and she was sentenced to death. He was so obsessed with her, though, that he had her body embalmed after her death, and set her body on display in the Tholos (the circular part of the cliff side buildings), at Masada. Josephus writes that Herod would go down to her every night and talk to her dead body – even while his other wife lived in the other palace on Masada. He also ended up killing most of her family, and three of his sons, leaving his throne to be split between three sons who remained.

Herod ended up dying a really slow, foul, painful death from Syphilis. Doctors now know it causes severe damage to the brain, nerves, eyes, heart, blood vessels, liver, bones, and joints. It is exceedingly painful, as it basically rots the body from the inside out.

Near the end of his life, he tried to kill himself. He failed. But his son heard he was dead and took the throne, overturning many of Herod’s edicts. Herod, the not-so-dead father, has his son arrested and horrifically killed.

Caesar is recorded as saying he would rather be Herod’s pig than his son, because at least the pigs died a humane death.

Long before the end of his life, however, according to the historian, Josephus, when Herod fled to Rome, he passed by this little town called Bethlehem, and just outside it, his mother’s chariot flipped and he thought she was dead. He mourned her until he found out she was still alive. In that moment, he swore he would built his palace in that very spot.

In order to get the palace as high as he wanted it to be, for security purposes, he literally had his workers move the mountain next to the spot of his mother’s near death experience, bucket by bucket into that spot. They would relocate the dirt and rock and cement each layer until it was as high as he wanted it: 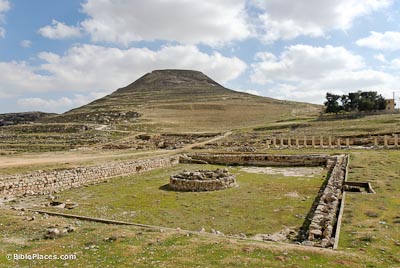 In the way back left, you can see the remains of that mountain, behind the new mountain which then Herod built upon his palace. In the foreground, you can see the largest personal swimming pool in the world at that time, with the stone in the middle. That was his personal office, where he could meet with officials if he was swimming. Jewish traditions says that the Herodium was the shining glory of Herod’s ego. It was where he could leisurely sit on a throne, in a palace he built, full of magnificent exotic plants and animals, upon a mountain he made.

And in the shadow of this palace of ego, vanity, and greed, a baby was born. Herod the Great heard from the prophets that this would be the king of Israel, who destroys the enemy of Israel and brings peace to the land, and he – in his Syphilis riddled agony – has all the baby boys murdered. He died two years later, replaced by his sons.

The beginning of Jesus story starts with these words, “Jesus was born in Bethlehem of Judea in the days of Herod the king.”

From the beginning of his life, Jesus is set in complete contrast against this man.

Herod had everything the world said and still says will make you happy. He was a good-looking man with an Olympic gold medal, he literally was the richest man in history, he had an extreme amount of political and military power, he was married to multiple, royal women, he was absolutely brilliant, he was exceedingly accomplished in the realm of his training. He literally had it all.

Yet, let’s see how Jesus compares:

From the world’s standards, Herod had everything. He was the hero everyone wanted to become. Yet. He died alone, mourning the wife he murdered, rotting from the inside out, without a family or friend in the world. Josephus records that at the end of his life, Herod was told that no one would mourn him because they hated him so much. Herod is recorded as saying, “they may not mourn me, but they will mourn.” And he set an edict imprisoning all the notable officials of Israel, and commanded that they would be killed upon his death. Just so people would mourn him. His entire goal in life was to be known as the best king in history. He has been remembered as one of the cruelest.

Ehud Netzer, the Jewish archaeologist who unearthed Herod’s throne at the Herodium, was once asked why he thought Jesus and Herod was alive together, and he said, “Need I remind you, there’s no generation that remembers Herod today.”

Jesus was sent during this horrific time in history to be born with nothing, against a king who had everything, to show us that the way of the world doesn’t work! Power doesn’t work in bringing a life of peace. Wealth doesn’t work to bring a life of peace. Fame, stature, beauty, none of it brings peace! The baby who is willing to sacrifice himself was a far greater power than Herod ever was. The one who came into the world with nothing, and left with even less – total abandonment and betrayal by those he loved – changed the course of history. We set time by him. The world was irrevocably changed for eternity because of him. Yet he had absolutely nothing the world holds dear.

Jesus showed us the way to peace, love, happiness, and spiritual prosperity; shalom with God. It is up to you to decide if you will walk in the ancient path of Messiah, or follow the road to Herod.